Statistics Canada is a member of the Industry Portfolio.

Statistics Canada's role is to ensure that Canadians have access to a trusted source of statistics on Canada that meet their highest priority needs.

The agency's mandate derives primarily from the Statistics Act. The act requires that Statistics Canada collect, compile, analyze and publish statistical information on the economic, social and general conditions of the country and its people. It also requires that Statistics Canada conduct a census of population and a census of agriculture every five years and protect the confidentiality of the information with which it is entrusted.

Statistics Canada is also mandated to coordinate and lead the national statistical system. The agency is considered a leader among statistical agencies around the world in coordinating statistical activities to reduce duplication and reporting burden.

Statistics Canada has the authority to collect and spend revenue from other government departments and agencies and from external clients for statistical services and products.

This quarterly report has been prepared by management using an expenditure basis of accounting. The accompanying Statement of Authorities includes the Agency's spending authorities granted by Parliament and those used by the agency consistent with the Main Estimates and Supplementary Estimates for the 2011-2012 fiscal year. This quarterly report has been prepared using a special purpose financial reporting framework designed to meet financial information needs with respect to the use of spending authorities.

The authority of Parliament is required before moneys can be spent by the Government.

Approvals are given in the form of annually approved limits through appropriation acts or through legislation in the form of statutory spending authority for specific purposes.

The agency uses the full accrual method of accounting to prepare and present its annual departmental financial statements that are part of the departmental performance reporting process. However, the spending authorities voted by Parliament remain on an expenditure basis.

B) Highlights of fiscal quarter and fiscal year to date results

This section highlights the significant items that contributed to the net increase in resources available for the year and actual expenditures for the quarter ended December 31. 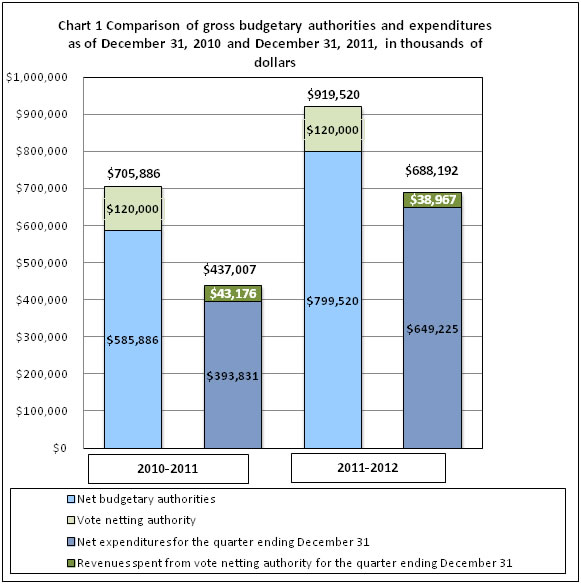 Chart 1 outlines the gross budgetary authorities, which represent the resources available for use for the year as of December 31.

Total authorities available for the year have increased by $213.6 million, or 31%, from the previous year, from $705.9 million to $919.5 million. This net increase is mostly due to the 2011 Census of Population and National Household Survey ($162.1 million), the Census of Agriculture ($8.5 million) and an increase in the amount carried forward from the previous year ($7.4 million).

An additional increase can be explained by specific items that happened in the third quarter of 2011-2012 (in which Statistics Canada authorities increased by $27.4 million, compared to the 2011-2012 second quarter). Most of the increase is related to:

The current fiscal year is the peak year for census-related activities.

The primary census-related activities for 2011-2012 are

In addition to the appropriations allocated to the agency through the Main Estimates, Statistics Canada also has vote net authority within Vote 105, which entitles the agency to spend revenues collected from other government departments, agencies and external clients, for providing statistical services. The planned revenue is stable for 2010‑2011 and 2011-2012 at $120 million.

Total expenditures recorded for the third quarter (ended December 31, 2011) increased by $12.1 million, or 8%, from the same quarter of the previous year, from $153.2 million to $165.2 million, according to the Table of Departmental Budgetary Expenditures by Standard Object.

Most of the increase in spending is due to census-related activities. Also, Statistics Canada has spent approximately 75% of its authorities by the end of the third quarter, compared with 62% in the previous year, due to census activities that occurred in the first and second quarter (Chart 1).

(01) Personnel shows an increase to payments related to the change with the severance pay between the Treasury Board Secretariat and the Personnel Administration Group. With this agreement, the employer will stop accumulating employees' severance pay. Employees were given the option to receive full or partial payment immediately for accumulated severance pay or retain it until their retirement. It also shows a cost increase resulting from the additional interviewers hired to manage the implementation of a new survey: the Programme for the International Assessment of Adult Competencies (PIAAC). This survey, which will assess literacy, numeracy skills and ability to solve problems in technology-rich environments in a consistent and coherent way across the countries, started on November 1, 2011.  Finally, this increase is also due to the payment of premium and overtime for census-related activities and payment of vacation leave due to the contract termination of censuses' employees.

03) Information shows an increase to payments related to advertising services. A census communications program was implemented in order to support data collection activities for which, the remaining of the advertising expenditures was invoiced during this quarter.

(04) Professional and special services saw increased costs with regards to census collection activities and other payments released in the third quarter whereas last year these payments were issued in the first and fourth quarters.

To mitigate this risk, Statistics Canada is monitoring planned revenue levels on a quarterly basis and is communicating with key federal departments to assess the impact of budget pressures on their need for statistical services and products.

Budget 2010 announced that the operating budgets of departments would be frozen at their 2010-11 levels for fiscal years 2011-2012 and 2012-2013. Statistics Canada adjusted funding allocations to meet this challenge and the impact on agency's activities is being managed through the following actions and mitigation strategies for the fiscal year 2011-2012:

D) Significant changes in relation to operations, personnel and programs

Again this year, Statistics Canada is part of the Canada's Top 100 Employers 2012 and the Canada's top family-friendly employers for 2012. The winners were respectively announced on October 7th and December 7th 2011.

Since the end of this quarter, Statistics Canada was also listed as one of the "National Capital Region's Top 25 Employers".

The Administrative Services Review is a comprehensive review of government administrative services that seeks efficiencies and ways to improve the effectiveness of external and internal service operations, business processes and administration through consolidation and greater standardization.

On August 4, 2011, the Government of Canada announced measures to streamline and identify savings in information technology through Shared Services Canada. Resources associated with email delivery and with data centre and network services are being transferred to this new entity. Statistics Canada is one of 44 departments and agencies selected for this new initiative.  Statistics Canada transferred 153 positions.