Statistics Canada is a member of the Industry portfolio.

Statistics Canada's role is to ensure that Canadians have access to a trusted source of statistics on Canada that meets their highest priority needs.

The Agency's mandate derives primarily from the Statistics Act. The Act requires that the Agency collects, compiles, analyzes and publishes statistical information on the economic, social, and general conditions of the country and its people. It also requires that Statistics Canada conduct the census of population and the census of agriculture every fifth year, and protects the confidentiality of the information with which it is entrusted.

Statistics Canada also has a mandate to co-ordinate and lead the national statistical system. The Agency is considered a leader, among statistical agencies around the world, in co‑ordinating statistical activities to reduce duplication and reporting burden.

Statistics Canada has the authority to collect and spend revenue from other government departments and agencies, as well as from external clients, for statistical services and products.

This quarterly report has been prepared by management using an expenditure basis of accounting. The accompanying Statement of Authorities includes the Agency's spending authorities granted by Parliament and those used by the agency consistent with the Main Estimates for the 2013–2014 fiscal year. This quarterly report has been prepared using a special purpose financial reporting framework designed to meet financial information needs with respect to the use of spending authorities.

The authority of Parliament is required before moneys can be spent by the Government. Approvals are given in the form of annually approved limits through appropriation acts or through legislation in the form of statutory spending authority for specific purposes.

In fiscal year 2012–2013, frozen allotments were established by Treasury Board authority in departmental votes to prohibit the spending of funds already identified as savings measures in Budget 2012. In 2013–2014, the changes to departmental authorities were reflected in the 2013–2014 Main Estimates tabled in Parliament.

The Agency uses the full accrual method of accounting to prepare and present its annual departmental financial statements that are part of the departmental performance reporting process. However, the spending authorities voted by Parliament remain on an expenditure basis.

B) Highlights of fiscal quarter and fiscal year-to-date results

This section highlights the significant items that contributed to the net decrease in resources available for the year, as well as actual expenditures for the quarter ended December 31. 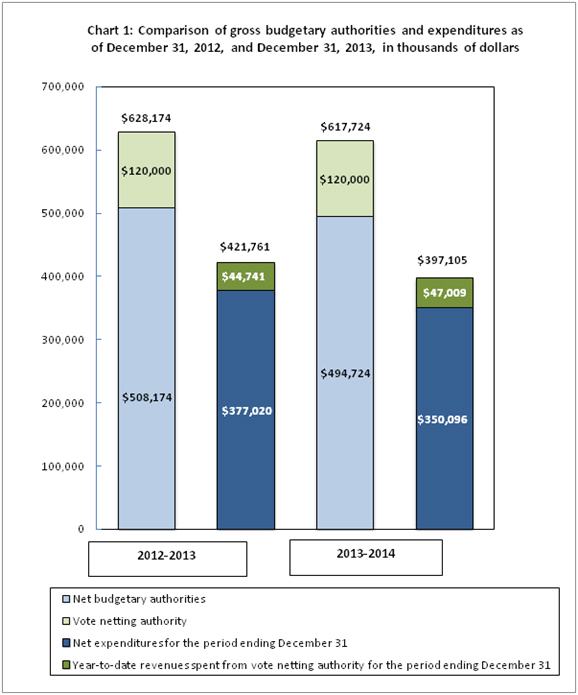 Chart 1 outlines the gross budgetary authorities, which represent the resources available for use for the year as of December 31.

During the third quarter, Statistics Canada authorities increased by $94.2 million compared with the second quarter of 2013–2014. Most of the increase is related to

In addition to the appropriations allocated to the Agency through the Main Estimates, Statistics Canada also has vote net authority within Vote 105, which entitles the Agency to spend revenues collected from other government departments, agencies, and external clients to provide statistical services. Vote netting authority is stable at $120 million in each of the fiscal years 2012–2013 and 2013–2014.

Year-to-date net expenditures recorded to the end of the third quarter decreased by $26.9 million, or 7%, from $377.0 million to $350.1 million. (See Table A: Variation in Departmental Expenditures by Standard Object.)

Statistics Canada spent approximately 65% of its authorities by the end of the third quarter, compared with 67% in the same quarter of 2012–2013.

01) Personnel: The decrease is primarily the result of a significant reduction in payments following the implementation of the Workforce Adjustment Directive. The remaining decrease is related to lower salary expenditures that relate to a smaller workforce, as well as lower retroactive payments that resulted from the settlement of collective agreements. These decreases are partially offset by an increase in severance liquidation payments related to the signing of collective agreements.

02) Transportation and communications: The decrease was the result of reduced field collection requirements for certain cost recovery projects.

04) Professional and special services: The increase was the result of timing differences between years for the payment of additional IT charges from Shared Services Canada. In addition, there was increased spending for training as well as informatics services.

09) Acquisition of machinery and equipment: The increase was the result of timing differences for acquisition of computer equipment and mobile collection units, as well as additional equipment requirements related to the Agency's space optimization project.

The increase in revenues was primarily the result of timing differences between years for the receipts of funds and scheduled key deliverables.

Budgetary pressures, arising from reduced appropriations and reduced cost-recovery revenues, resulted in financial and human resource management challenges in 2012–2013. To manage human resource risks, the Agency opted to move quickly to implement all mandated program adjustments and corresponding workforce reductions. To manage financial risks, given uncertainties over the timing of costs arising from workforce adjustment and the speed of implementation of program adjustments, additional controls were implemented on non-salary expenditures.

In 2013–2014, Statistics Canada plans to continue to meet these challenges with the following actions and mitigation strategies:

2011 Census of Population and the National Household Survey

Planning for the 2016 Census of Population has begun, including assessing users' content needs and beginning to test questionnaire content. Systems, processes and methodologies are also being developed or updated based on lessons learned from the 2011 Census Program.

This section provides an overview of the savings measures announced in Budget 2012 that are being implemented to refocus government and programs, make it easier for Canadians and businesses to deal with their government, as well as modernize and reduce the back office.

The savings incurred through these program adjustments represent moderate reductions in the production of statistics to support development, administration, and evaluation of policy, while continuing to meet the public's highest priority needs. In some cases, the information will continue to be available in a different format. A full list of program adjustments is available online.

Year-to-date expenditures for 2013–2014 are lower than in the previous fiscal year. The reduction is partially the result of the reduced workforce required after implementing the program adjustments mentioned above.

There are no financial risks or uncertainties related to these reductions.