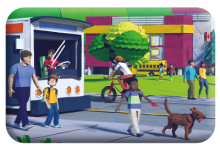 Thanks to the outstanding participation of Canadians in 2016, Statistics Canada conducted the most successful census in Canadian history.

Fast forward to the end of 2017, when the last census results are being published—within 18 months of Census Day and 10 months quicker than the 2011 Census.

For the 2016 Census releases, Statistics Canada built on the success of the 2011 Census and developed new, more advanced data visualization tools, including a bubble chart that provides a visual representation of the proportion of mother tongue for various regions in Canada, an interactive chart that highlights the population growth in Canada and the total income explorer, which illustrates individual total income by various categories.

Accompanying these data tools were a series of fun infographics that were created to help people understand key information derived from the data and quickly communicate key findings. Similarly, the videos that were produced offer an interactive way to tell a story by showcasing key data points.

Gabrielle Beaudoin, Director General of the Communications and Dissemination Branch, stated that "Data visualization tools help foster engagement with the data releases and encourage different audiences to discover, navigate and potentially make repeated use of the data."

Together these new tools provide another way to visually communicate statistical information, engage data users, and demonstrate the importance of statistics in the economic and social development of Canada.

In the coming weeks, Statistics Canada will release the last of the major datasets. The October 25 release will focus on immigration, ethnocultural diversity, housing and Aboriginal peoples. The November 29 release will cover education, labour, journey to work, language of work, mobility and migration.

As with the previous releases, the next two will also feature new visual tools, infographics and videos. Stay connected by following our official social media accounts on Twitter, Facebook and YouTube!