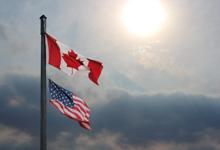 Update Feburay 18, 2019 – The release for Canadian international merchandise trade data for the December 2018 reference month, originally scheduled for February 5, has been postponed to March 6. In addition, the release of data for the January 2019 reference month, originally scheduled for March 7, will also be delayed. Release dates for subsequent reference months will likely be affected as well. For more information, please consult “New release date for the publication of the December 2018 reference month for Canadian international merchandise trade data.”

Update January 30, 2019 – On January 25, 2019 the US federal government reached a temporary resolution to the partial shutdown that impacted the US Census Bureau (USCB). Statistics Canada is consulting with the USCB on recovery efforts, and will provide users with details regarding the next release of monthly International Merchandise Trade statistics and possible impacts on fourth quarter statistics as new information becomes available. All efforts are being made to incorporate data for Canada’s exports to the United States for the December 2018 reference month into fourth quarter statistics for the Canadian International Balance of Payments, and Gross Domestic Product, which will be published on February 28 and March 1, 2019 respectively.

Under the terms of an agreement between Canada and the United States that came into effect in 1990, each country uses the other's import data to produce its export statistics. For example, U.S. imports from Canada reported to U.S. Customs and Border Protection are compiled by the United States Census Bureau (USCB) and transmitted to Statistics Canada to be used as statistics for Canada's exports to the United States.

On December 22, 2018, a partial shutdown of the U.S. federal government came into effect, resulting in the indefinite closure of the United States Census Bureau. For the duration of the shutdown, Statistics Canada will not receive data for Canada's exports to the United States.

Data for the upcoming release on January 8th, 2019 (November 2018 reference month) will be unaffected by the current disruption, as a complete set of records was received from the USCB prior to the government shutdown.

The United States is Canada's most important trading partner, with about 75% of Canada's total international merchandise exports destined for the U.S.. Canada is also the top export destination for U.S. goods, accounting for about 18% of total U.S. merchandise exports. Under normal circumstances, both Statistics Canada and the United States Census Bureau publish statistics for international trade in goods simultaneously at 8:30 AM eastern time on predetermined release dates. The sharing of import data, which is generally preferred because of the greater scrutiny import shipments are subject to by customs agencies, helps to ensure accurate and coherent bilateral trade statistics, while reducing the administrative burden on exporting companies.

Statistics Canada is closely monitoring the present situation and is preparing for various scenarios to minimize the impact of this event for its users. Further information will be provided as it becomes available.