Canada Day... by the numbers 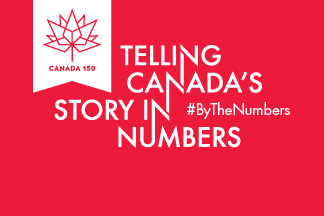 Who better to help count the 150 candles on Canada's birthday cake than Statistics Canada that has been telling this country's story in numbers for more than a century?

How we have grown in 150 years! Did you know that Canada's population has increased tenfold since Confederation?

The age composition of Canada's population has also changed considerably since Confederation.

Sources: Population and dwelling counts and Age and sex, 2016 Census

More than 17 million people from all over the world have made Canada their home since Confederation in 1867.

Canada's diversity also evolved as English and French became the languages of convergence and integration into Canadian society. More than 200 languages were reported in the 2011 Census of Population as a home language or mother tongue. These include Canada's two official languages (English and French), Aboriginal languages, immigrant languages and sign languages.

Consistent with changing immigration patterns, Canada is also a nation of people with diverse religions.

Canada 150 provide unique opportunities to strengthen our sense of what it means to be Canadian. But what are Canadians' perceptions of national identity concerning national symbols, shared Canadian values and pride?

Our land and natural environment

Canada extends across 10 provinces and three territories, spanning the shores of three oceans. With its high mountains, various forests, grasslands, rivers, lakes and arctic tundra, our country has one of the most diverse and beautiful landscapes in the world!

Agriculture also occupies a large portion of Canada's landscape in many areas of the country.

Source: A portrait of a 21st century agricultural operation

Besides an abundance of land, Canada has water aplenty!

Sources: Freshwater in Canada, Human Activity and the Environment, 2016, Summary tables, Principal rivers and their tributaries and Canada Year Book, 2012

From tourtière, honey and smoked meat to poutine, butter tarts and bacon—Canada has its own culinary traditions. With a landscape as diverse as Canada's, flavours tend to vary by region. That's especially true for one of our favourite sweets—none other than maple syrup!

While we know there's more to Canada than maple taffy and beavertails, there are a few 'typically Canadian' foods and beverages that we call our own.

Whether you're skating during the winter months or camping during the summer, it's no secret that Canadians enjoy the great outdoors.

Here is a list of places across Canada for which founders may have been inspired by 'typically Canadian things', from our wildlife, climate, activities, foods and symbols!

For more information about this page or for help finding more data, contact Media Relations.

See features on many other subjects in By the numbers.